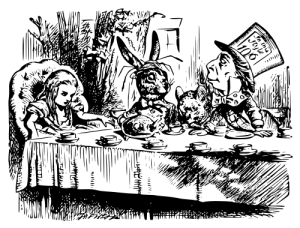 A philosophy professor acquaintance of mine recently wrote an interesting blog post defending the Tea Party’s rationality, and then Salon.com came out with an article, Tea Party Radicalism is Misunderstood, echoing some of those points and differing on others. I appreciated the attempts at de-simplifying people’s views of the Tea Party’s tactics, and I have been doing a lot of thinking the past few days about political beliefs and rationality (being furloughed from my job as a federal employee, I have had plenty of time think).

After my initial shock and anger at being furloughed, during which I was firing off endless tweets to Rep. Boehner and Sen. Ted Cruz about how the Republican party was a bunch of terrorists, I banned myself from social media for a few days to give myself a chance to mourn quietly and calm down and create some rules for myself about how to deal mentally and emotionally and socially with all of this. My situation is a little complicated by the fact that I have a very large extended family and network of old friends who are mostly very politically conservative, and many think the shutdown and proposed default on the national debt are great ideas, and that the Republicans in Congress should keep on going with forward with this strategy until Obamacare is defunded, and even then maybe they still should keep it going.

The shutdown is creating looming financial hardships for me and many other federal workers I know – yes, a bill was passed to give us back pay, but there is no knowing how long many of us will have to live on our savings or borrowed money. The city of DC, where I live, is running out of its cash reserves, and it’s anyone’s guess how long it can keep up basic services. But I think what has been hardest and most frightening for me has been having to emerge from the little apolitical literary bubble in which I’ve been living happily for the past few years, and having to open my eyes to the ugly thing that political discourse has become.

For the past few years I have pretty much ignored politics and the news (except for news about books and publishing) and have just been focused on taking care of my daughter, writing historical novels, and making it through the exhausting nine-to-six-thirty grind. But now it’s hard to ignore. What I observe is that productive communication about politics seems nearly impossible. People simply do not want to engage with those who don’t share their own beliefs. Conservatives will watch Fox News, and liberals will read the New York Times and the Washington Post, and never the twain shall meet. They surround themselves with voices that reinforce what they already believe. But if we aren’t willing to let our beliefs be challenged, how can we ever learn if we’re wrong about something?

In fact, the phenomenon of being stuck in the proverbial echo chamber is understandable, because those brave souls who do attempt to engage with opposing opinions get slammed with incredible vulgarity, hyperbolic insults, mockery, dismissiveness, and unwillingness to listen. It doesn’t take long to get a sense that any attempt at a true exchange of ideas under those conditions is futile. And these words may not be sticks and stones, but they can deeply hurt people who are already going out of their comfort zone in the attempt to talk to people on the other side. So I can hardly blame people for wanting to retreat to the soothing haven of forums where the views they hear are in line with their own. My enraged tweets accusing elected lawmakers of terrorism were sadly typical.

How can real conversation ever take place if we aren’t willing to be polite and respectful to each other?

“But what if the other side doesn’t deserve respect? What if they’re just a bunch of self-serving jerks? What if they’re seriously just lunatics?” On the self-serving jerks question, well, if we only respect people who serve our interests, are we any less self-serving or jerky? Productive discourse is most likely to take place if we begin from a faith that other human beings have intrinsic worth and embrace a default stance of civility toward those we enter into dialogue with.

And on the lunatics question – finally getting to the main point of this post – I think true instances of mass mental illness are fairly rare, at least if we’re talking about delusional psychosis. What I do see a lot of that can look quite a bit like lunacy is listening in bad faith and without charity. The pattern is all too familiar: a politician says something that sounds horrible or ridiculous or self-damning when taken out of context. Or perhaps a public figure is just plain having a bad day, or is exhausted, or genuinely misspeaks, choosing the wrong words or mistaking the facts in the heat of the moment. The statement is then gleefully taken up and spun by journalists and social media. It shouldn’t take too much brain power to see through these seemingly outrageous statements, and yet gaffe-spinning has become a veritable industry, and a form of willful laziness prevails among consumers of journalism and social media so that they simply aren’t willing to exercise even the small amount of brain power it would take to approach such reported statements with the skepticism they deserve.

As for charity, I’m not referring to the Christian concept of brotherly love (though that would not be out of place here), but rather the philosophical or rhetorical principle that your own argument will be more valid and convincing if you have given your opponent’s arguments every benefit of the doubt and considered it with the maximum amount of fairness and generosity. That kind of charity is hard, dog-hard, not nearly as easy as seeing through gaffes. It’s more of an ideal to strive for than something anyone ever one hundred percent masters. But the more all parties involved strive toward that ideal, the more productive arguments can be, not to mention the more emotionally endurable.

So, the conservatives, and the Tea Party — are the people who adhere to their principles and strategies irrational? I would say not in the sense of being “crazy” en masse, though I do see some of this listening in bad faith and without charity in some of them, as I also see it in some people on the left. On the other hand, political beliefs of any stripe often resemble religious beliefs in that they function more like marriage commitments than logical thought processes. People are tied to their political identities, as they are to their romantic partners and to their religious roots, through complex webs of time, emotions, values, memories, experiences, educational histories, family and friends, community roles, hopes, and fears. As such, people can rarely ever be simply talked out of their politics, though they are capable of switching sides, just as they may leave romantic relationships and religions. When they do, it can be a long, slow, painful process.

I don’t see the persistence of political beliefs, even in the face of seemingly contradictory evidence, as irrational or contrary to reason, so much as it may be non-rational. That is, it may not have much at all to do with one’s ability to reason (or one’s intelligence or educational level for that matter), and may have a lot more to do with the “givens” we start out with and have to reason from. (For example, “given” that John enjoys eating pineapples, therefore, it would be rational for John to seek to eat pineapples. His original liking for pineapples is neither rational nor irrational.) On the other hand, arguments based in fact and reasoning can play a role in changing people’s commitments, even if they will not always play a starring role alongside attempts to influence people’s desires in non-rational ways. (For example, if someone tells John that his pineapple has been genetically modified, he will have to consider whether his life-long liking for pineapples outweighs his worries about genetically modified food. But then there is that seductive ad for pineapples, which makes them seem so sweet and ripe and luscious! Plus, the pineapples are on sale. His children love pineapples too — he must think of the children! John has a very tough call to make …)

To be productive and worthwhile, political discourse has to understand and acknowledge these complexities and the non-rational elements that hold people to their political commitments. It’s all too easy to lose sight of them and get frustrated because “people won’t see reason” or “won’t acknowledge the facts,” and then you want to start accusing people of being crazy. As for the Tea Party, in holding firm to their deeply held beliefs, they are being, if not exactly rational, very quintessentially and typically human. I don’t agree with their beliefs or their strategy, but I respect their humanity, and I believe that they have their reasons for believing as they do, even if those reasons aren’t always clear to me, or even to them. (Is my own reasoning about my life choices always clear to me?)

So here are the principles I’ve laid out for myself for participating in conversations about politics:

What are your principles for talking politics?

One thought on “Is the Tea Party Irrational?”