It’s been an eventful spring and summer in some ways, so I thought I’d do another catch-up post.

In mid-May I had an odd experience. I was coming home from a dinner with friends at restaurant downtown around 11:00 at night, and took the American University shuttle bus from the Tenleytown metro station, which lets off near my apartment building so that I only have a 5-10 minute walk from the campus. The last thing I remember was getting off the bus, before waking up with everything dark, hearing voices over me:

“Okay,” says a voice near my head, “we’re just going to stitch you up. This might sting a bit.” The cold bite of a needle in my forehead, not painful, but cold. I open my eyes. The needle was just an anesthetic; now the actual stitching happens. It feels like something tugging at the skin on one side of my forehead.

“Where am I?” I ask, as the tugging stops and I hear the snip of scissors cutting the thread.

“An ambulance brought you.”

“What happened?” I ask. In retrospect I’m not sure why I was so calm, but nothing really bothered me too much about the situation at the time.

“We were hoping you could tell us that. You were found in the street on Nebraska Avenue. You got a pretty big bump on your head.”

It’s about two in the morning, I learn, and nobody knows exactly what happened to me. A night nurse tells me she saw my police report, which says that some witnesses found me on the ground and saw me throw up. I have a concussion and severe bruising on my knees and on the back of my left lower leg. Apparently when the ambulance came I was talking and moving around, but I couldn’t remember anything about myself to tell the ambulance workers other than my name and where I worked. I have no memory of any of this.

I still had all my clothes on and nothing had been stolen, so it appears the answer to that first question was no, I hadn’t been assaulted. Later I would formulate the theory that I’d been run over by a bicyclist or a moped, because of the bruises on the back of my left calf. They were too low to be from a car, but something had definitely run over me. I think a bike or something similar must have been coming up from behind as I got off the bus, and didn’t see me until it was too late. I still don’t know if it was the person who hit me who called the ambulance, or if it was a hit and run. I still don’t really know much at all about what happened.

They kept me in the hospital for two days. Whenever I stood up I was dizzy, and my bruises hurt a lot. I managed to rinse some of the blood out of my hair, but couldn’t really shower, and felt pretty gross. A handful of friends came to visit. When I was finally allowed to leave, I had to call someone to drive me home. The nurse gave me a bag with all my things in it. I tried to put my clothes on that I’d been wearing the night of the accident, but they’d all been cut up by the emergency room staff. They were soaked with blood and vomit and smelled horrible, so I threw them in the trash. A guy I’d gone on a couple of dates with, who’d come to visit me in the hospital and had brought me flowers and read to me for an hour, also bought me underpants from the hospital gift store – they were Hanes and they were huge granny undies that came up to my belly button. He was very embarrassed, but I appreciated having underwear. We are still dating.

My friend Tanya picked me up from the hospital and brought me some of her old clothes to wear, and drove me home (did I mention Tanya is a wonderful person? Check out her blog, and you’ll see what I mean.)

So that was kind of an adventure. In all I missed three days of work, and was dizzy for a week or two. Apart from the hospital bills, that was the worst of it. It could have been worse, and I feel pretty lucky, considering.

In June I finished the first draft of my third novel. It’s called What They Sought in the Sea, and is about a girl who washes up bruised and naked on the shore of a fishing village in Northern France in the 1850s. A local family takes in her, and they and their neighbors find their lives disrupted as they try to solve the mystery of the girl’s origins.

I’ve been revising the book since June and have gotten some good feedback from beta readers. I’ll be querying (more) agents on it soon. 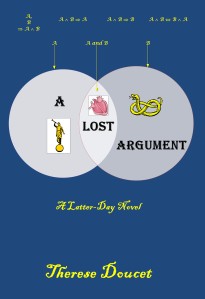 In July I started to work on self-publishing my second novel, A Lost Argument, since despite a number of promising leads in the end I’d been unable to find an agent for it and didn’t have much hope for finding a publisher without an agent. In researching self-publishing, I gradually started to realize that with all the work that went into it, I could almost as easily set up my own press for publishing other people’s books.

The idea was kind of appealing to me, because as I’d tried to find a publisher for my book, I’d had some discussions with other former-Mormon writers who wrote about Mormonism. There are a lot of very talented people out there writing about their experiences in and out of the Church, but it’s hard to find a publisher because Mormons, let alone ex/post/former/alumni Mormons, are something of a niche audience. If you’re writing faith-affirming stuff, there’s always the chance of getting picked up by one of the handful of Mormon publishers: Deseret, Covenant, or even brave little Zarahemla Books (go them!) And every now and then you get the rare breakout book that catches the attention of mainstream publishers, like Elna Baker’s  New York Regional Mormon Singles Halloween Dance, or Martha Beck’s Leaving the Saints. But for the most part, ex/post/former/alumni Mormon writers are on their own. If I started my own press, though (I thought), I could maybe do my own little part towards finally giving that niche audience a home for those writers’ books.

And so I kept on researching …

And in August I registered my own publishing imprint, Strange Violin Editions, with the United States ISBN agency (Bowker) and bought a ten-pack of ISBN numbers. I bought the website domain name, and put in a registration with the Library of Congress so that in the future I’d be able to get cataloging-in-publication data for the books I published. And I published my novel as an e-book through Smashwords.com under the Strange Violin Editions imprint. Whoo-hoo! Next came the Kindle Edition on Amazon. Then I dove headfirst into the arcane world of print book design and formatting and immersed myself in the geeky details of typography, and finally uploaded the files for a paperback version on Amazon.

I also started a new novel, which will be my fourth. I haven’t picked a title yet, but it’s going to be a comic novel (a la Christopher Buckley, hopefully) about a high-ranking Mormon Church leader gone bad who’s secretly working to undermine the Church. When he takes a ditzy young artist for a mistress, the two get caught up in international intrigue and espionage. It’s going to be seriously fun to write, I think.

That paperback version is finally available for sale. And I put together the Strange Violin Editions website. I’ll be sending around a formal call for submissions at some point, but the online submissions manager is already set up and ready to go, which means folks can start submitting now. And last week, I sent out a book contract to my very first author, Steven L. Peck (well, my first author other than me, that is!) It’s all coming together. Pretty exciting!